On 16th and 17th July this year, Craigmillar Library were lucky enough to play host to a fabulous team from CBBC Learning.  The BBC selected our library – of all the libraries in Scotland! – to be part of their massive CBBC Awesome Authors event: a weekend-long celebration of books and reading for kids.

With help from the BBC, Craigmillar Library staff put together an exciting programme of activities for kids.  The BBC helped us to bring a truly star-studded line-up to the library: we hosted authors Chae Strathie, Pamela Butchart, and David MacPhail; ‘Eve’ stars Eubha Akilade and Oliver Woollford, and we had the great Tyler West, of CBBC Match of the Day Kickabout, as our master of ceremonies!

We were also able to live-stream talks by other authors from the Awesome Authors HQ in Birmingham.  Jacqueline Wilson talked at length about her very popular Hetty Feather – the book and its TV series – on Saturday, and on Sunday we beamed Frank Cottrel Boyce into the library.  Local kids who attended the event were able to send their questions direct to the authors.  10-year-old Ella, one of our library regulars, asked Jacqueline Wilson what her least favourite book is – a hard question!  Meanwhile, kids were also invited to get hands-on with our own Edinburgh authors.  Pamela Butchart asked twelve-year-old Sandy – a library regular and a member of our Game Club – to act as The Crisp Inspector as part of her writing and drawing workshop!  (Sandy is now a convert to Pamela’s work – in fact, she’s reading one of Pamela’s books as part of this summer’s Big Friendly Read!)

In addition to the authors and TV stars at work in the library, our staff and friends from other local organisations were also on hand with a diverse range of activities, open to all who attended.  Library Advisor Abi Lewis ran a hugely popular Art Ninja workshop, at which over 500 colourful bookmarks were created!  Kids on the Street were in attendance both days, offering drop-in kickabout sessions all weekend.  And the Craigmillar Library Game Club were, of course, present: we brought along a big box of story-based, reading and word games, and welcomed kids to our drop-in game sessions all through the weekend.

One of the things we did in the Game Club tent (on Saturday – we had to move inside on Sunday due to unseasonable July cold!) was encourage the kids who came along to take part in home-made games, created especially for the event.  Our Story Stones – inspired by the brilliant storystoneselfies at the Scottish Storytelling Centre – were made by kids who dropped by, and were then turned into sentences, stories and poems.  We also made our very own Author Top Trumps cards, featuring authors suggested by kids who attend the library.  Some of the suggestions for the cards included Danny Scott, Philip Pullman, Malorie Blackman and even Stephen Hawking!  Our favourite moment of the day was getting chance to have a quick game with Pamela Butchart – she was absolutely chuffed to see that she’d made it onto one of our cards!

Thanks to the BBC, we were able to test drive lots of new story-based and wordy games over the weekend.  The most popular was definitely Bananagrams – a fast-paced, fun, boardless take on Scrabble that helps teach spelling and promote literacy.  If you fancy having a go at any of these games, you can come along to our Game Club, which runs every Monday night from 5.30pm in the library. 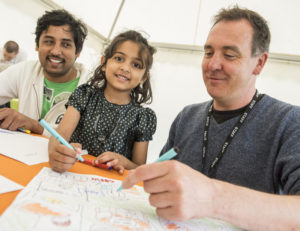 Everyone here at the library would like to thank all the kids who came along and got involved – we welcomed around 500 children each day!  We’d also like to thank the parents and guardians who came along and helped make sure that all our young visitors enjoyed themselves over the weekend.  And of course, we’re super grateful to everyone who came along and ran activities, read from their work, encouraged creativity and celebrated reading!  Authors, TV stars, local organisations, library staff, BBC staff, and volunteers alike… thank you!  When can we do it all again?