Recently we covered the fact that Craigmillar Country Park, which houses Craigmillar Castle with fantastic views across the Firth of Forth as well as East & Midlothian was been used as a dumping ground for residents to discard their household rubbish, so it is sad to say that this is still continuing on a regular and ongoing basis.

As a regular user and walker in the park it frustrates me that people can have little or no respect for the environment, community or the place in which they live.  It is obvious that one particular street in which uncollected council rubbish is lying for weeks on end with incorrect waste put in the wrong coloured bins and not being taken away by Council workers is then eventually moved and dumped immediately opposite into the park.  Just for this cycle to happen all over again the following week.

Not only is this a health hazard to children as well as animals, who use the park due to the decomposing waste, used nappies and rotting food lying in the park, but it also deters from the natural landscape that makes the park so appealing.  The local streets are used throughout the year as an access to the park, not just for locals, but tourists visiting the city to see the castle, so what kind of impression does this give to them about us in Craigmillar and its residents, who appreciate the place in which we live?  It is apparent that the actions of a few are destroying the image of a cleaner, nicer Craigmillar in which we have to live and work.

The local “official” city recycling centre is only a five minute walk away, which makes this matter even more annoying, based on Old Dalkeith Road, but a straight and easy walk through the park.

Details of which can be found here: Edinburgh City Council recycling centres

It would be helpful if Edinburgh City Council could try and deter this wanting disregard of local green spaces by educating and informing residents as to their responsibilities to their neighbours and the greater community.

I would appreciate any local Councillors viewpoints on this and how to compound what is an ongoing and continual shame on us all. 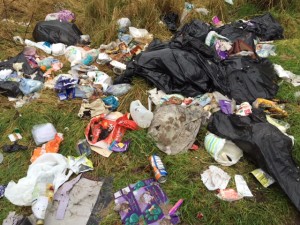 The picture above is only one of many dumped rubbish sites throughout the park and was taken on 21/01/2016 at 08.00am