For years Craigmillar Country Park as been a great place for walkers, sightseers and locals alike to take a leisurely walk, mixing stunning scenery and history together with Craigmillar Castle overlooking the city as well as Arthur’s Seat and Salisbury Crags not to mention views of the Kingdom of Fife and across East and Midlothian.  However for the last few years it has become a haven for people to visit it for a completely different purpose – Fly tipping and dumping household waste!

As a regular walker who is in the park at least twice a day with my dog I have become fed up with people bringing not only their unwanted household furniture including, beds, mattresses, three piece suites, prams (that seem to be left in abundance) not to mention just good old kitchen waste and rubbish and dumping it with no regard for the area, the people or the impact on the local environment.

What makes the matter worse, is the fact the Edinburgh Council have a recycling and waste centre situated adjacent to the park, on Old Dalkeith Road which is easily accessible through the park, but is disregarded by fly tippers who seem just too lazy to take their rubbish along to it.

Since Edinburgh Council changed their bin days and introduced the new landfill bin, things seem to have gotten worse, with residents putting the wrong coloured bin out or the wrong contents, so it is not disposed of properly by the Refuge Collection Team and eventually is moved from the street and dumped in the park.  The issue is  – not only is it annoying but it is also a health hazard to the residents, dogs, children and anyone using the park with rubbish being torn to pieces by birds, foxes and dogs it is only a matter of time before we are over run by mice and rats! 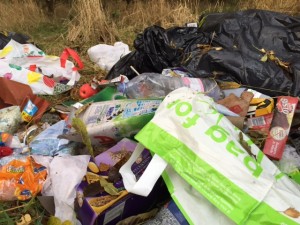