Back in June this year TSB wrote to me to let me know they would be closing the branch on Niddrie Mains Road. I was greatly concerned. This area has had its fair share of tough times, but right now we are in the middle of big program of regeneration. Houses are being built and the High Street is being renewed. It seemed such a bad time for the bank to be closing.

I wrote to the boss of TSB to let him know how I felt and to ask him to reconsider. I pointed out the opportunities that would be open to them with all the new residents coming to the area and the new businesses that will be opening. I also felt that they hadn’t undertaken the level of community consultation that I would have expected. 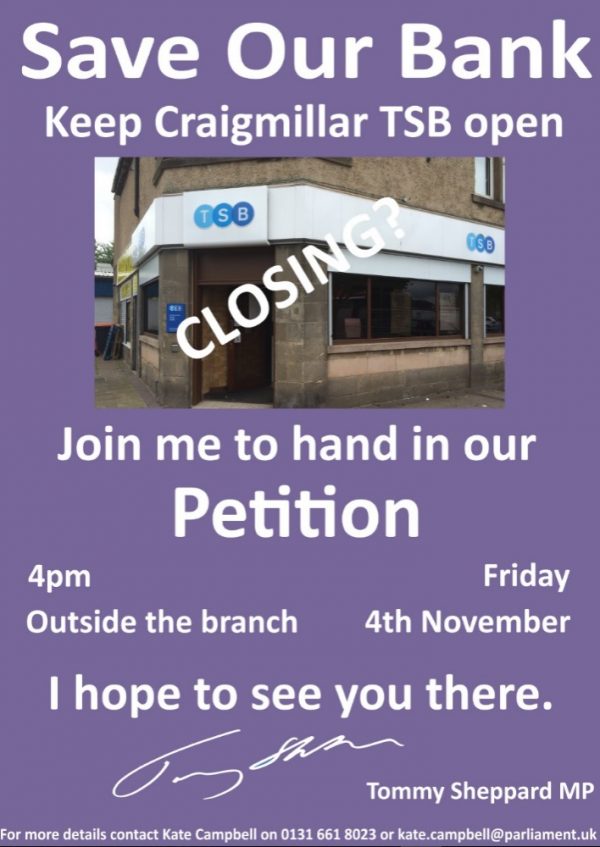 Since then there has been ongoing correspondence and I even had a meeting with the boss of TSB in Scotland. They maintain that it is one of their least used branches – hard to believe from the busy stream of customers I see going in and out when I am in my office down the road – but they have statistics to prove it. They also said that most customers that use the branch have also used another branch in the last year.

I spoke to them of the importance of the branch to the high street – something they did recognise – and suggested that if they were to change their minds it would be a not just a good, but a great news story for them. To show a commitment to the community, especially as they are trying to relaunch their brand as a ‘customer focussed high street bank’, would bring them a good deal of loyalty and appreciation from residents. They did seem tempted but it was not enough.

I think we are at the point now where it has become clear that they are not going to reverse the decision – but there is a glimmer of hope. They own the building and right now, with Brexit and all the economic uncertainty that comes with it, it is a difficult time to try to sell a commercial building.

At the meeting they said they were thinking of doing a ‘pop-up’ service in the community. I suggested that they could ‘pop-up’ inside the branch which they will still own at least a couple of afternoons a week. My focus is now to get them to consider running the branch as a satellite service from the Cameron Toll branch. This would incur minimum cost to them and would keep a vital service on our high street.

We have been running a petition which is just under the 1000 signature mark. I am suggesting that we do a final push to get over a 1000 signatures and all turn up to present them to the bank on the 4th November at 4pm. If we can get a big crowd, some banners and some press there we might just be able to convince them of the importance of the bank to the community and persuade them to give us a satellite service in the branch.

I hope many of you will make it along, bring your friends and neighbours, and just maybe, together we can save our bank.

If you would like to add your name to the petition mentioned in Tommy Sheppard’s post, copies are held in his office on 16 Niddrie Mains Road which is open from 1:30pm to 4:30pm on Monday to Wednesday.