On Friday 15th and Friday 22nd April, a few residents within the communities of Bingham and Magdalene, with the support of Community Renewal, and the assistance of City of Edinburgh Council’s Park Rangers, undertook the task of a local community clean up in each area.  We also had help from James Carver of Portobello Timebank, who have recently carried out successful clean-ups along the length of the Brunstane Burn.

On both days, hot soup and lunch was provided by volunteers from Magdalene and Bingham Community Centres and residents were invited to bring along any items they no longer wanted and swap or give to others in the community.  Any unwanted items were then donated to local charity shops. The events were not well attended, in spite of 1500 leaflets being distributed through every door, but they were felt to be a real success, buy those who did get involved. A two tonne cage of rubbish was filled on each day. 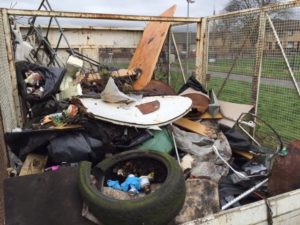 Sheila McWhirter, on behalf of Community Renewal, said,”Rubbish, flytipping and issues to do with cleaning up the area are obviously ongoing problems to be tackled in Bingham and Magdalene. This is just the start of a process, that came about through our engagement with local resident’s to find out what they like and don’t like about the communities they live in.  We found there are lots of people unhappy at the general untidiness of certain areas, which they want to see improved, and are frustrated at the perceived deterioration in services such as rubbish collection and issues such as fly-tipping in the areas. It will take a lot of action to make a real change, to lobby for improved services and to explore realistic solutions towards long term change”.

Local residents have made many comments about the issues over the last four months, such as

“if everyone just picked up one piece of paper that was lying in the street, it would be a better place:

“People have poor attitudes and lack knowledge, they won’t recycle, they need help to do that, in the meantime get a proper solution put decent bins in and lots of them”

Two feedback meetings are planned, at which local people can come together to discuss the findings across the environmental issues and other themes, such as building community spirit and improving local facilities and services. This is just the start, in what, hopefully, will become a process of working towards specific projects by bringing resident’s in their communitis together to develop long term solutions to issues and build on all that is good in the two areas.

If you would like to get involved, then come to the feedback meetings or get in touch with us, The meetings are to be held in Bingham Community Centre At 7pm on Tuesday 26th April and in Brunstane Primary School at 7pm on Wednesday 27th April.