It feels like a long time since Scottish Book Trust‘s four new Reading Champions were announced, as part of Book Week Scotland 2015.  I was thrilled to be selected as the Reading Champion for Craigmillar Library in Edinburgh, and couldn’t wait to get started.

Fast-forward to mid-March 2016, and my first day in post.  Walking into Craigmillar’s huge, modern, colourful Library, I couldn’t quite believe I had first-day-of-school butterflies!  I was about to meet most of the Library staff for the first time, and be thrown headlong into the busy schedule of clubs and activities.

It turns out, I needn’t have worried: my first week was full of warm welcomes.  I met the Library Link group, a weekly drop-in group for older people, run on Thursday mornings.  Library Link mornings mean lots of cups of tea, tasty snacks, chatting, and exchanging books.  At my first meeting, some of the Library Link ladies introduced me to the library’s rotating stock of knitting magazines, and we bonded over our shared experiences of knitting disasters and triumphs!

That same week, I sat down with some of the library’s biggest fans: the local children who come along after school to spend time here.  For many of them, the library provides a handy space to meet up – they play games on the computers and games consoles, and attend the various kids’ clubs run by library staff.  Craigmillar Library runs a twice-weekly Minecraft Club for over-7s, a drama group, and a variety of crafting activities (you can find out what’s on at Craigmillar by visiting the Library Facebook page).  Naturally, I was keen to attend the Kids’ Knitting Club!  While we learned some new stitches, I asked the kids what they’d put in their dream library.  The answers varied from “books about Viking boats” to “a chocolate fountain” and “a resident library owl”!

I had to get my sleeves rolled up right away: the library staff and I were keen to run some kind of event to launch Scottish Book Trust‘s new public writing campaign – and we had less than two weeks to decide what it would be!  Library advisor and resident games expert Joe suggested a murder mystery style game, as the theme of the writing campaign is “Secrets and Confessions.”  I got to work, figuring out how to incorporate books and reading into a (family-friendly) murder mystery activity.

The resulting activity was A Monster Murder Mystery – a scenario in which Frankenstein’s monster had escaped from his book (we all know fictional characters do this when we’re not looking, right?), and turned up lifeless in the library, with no explanation.  We invited amateur sleuths aged 8+ to come into the library, examine our crime scene, and hunt for clues in order to solve the mystery.

I created the game in order to introduce participants to the variety of titles stocked in the library, and to teach useful library skills, like how to search the online library catalogue, how to find out what activities are offered, and so on.  On the day of the activity, over twenty kids and teens came along to the library to get involved.  They worked in teams (with wonderful, alliterative names: Mystery Marshmallows!  Monsters In Crime!) and worked their way around the library collecting my clues, following their hunches, and using their case files to record the evidence.

In the end, the Master Minds team took first prize, solving the mystery first – though it was a photo finish!  By the end of the day, we could see that several of the kids had benefited from getting involved – within half an hour of the game ending, one young man used the library catalogue to reserve a book for the very first time! 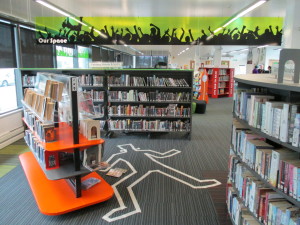 In case you were wondering what adult readers got to do while all this was going on… never fear!  Also to launch “Secrets and Confessions,” I ran a Twitter hashtag for adults to get involved in: #IConfessINeverRead.  I invited adults to let me know what books they thought they probably ought to read, but never had… and the results were very interesting indeed!  Who knew so many people had blagged their way through classes in school, essays at Uni, and even exams on books they’d never actually read?!

It’s been a whirlwind fortnight, but I don’t have time to stop now… my next task is to prepare some exciting activities for World Book Night, coming up on 23rd April.  Craigmillar Library will be giving away three different texts: Matt Haig’s Reasons to Stay Alive, Sarah Hilary’s dark crime novel Someone Else’s Skin, and, for the poetry lovers, Carol Ann Duffy’s Love Poems.  If you want to keep an eye on what I’m plotting, you can follow my Reading Champion blog on Tumblr.  Watch this space!