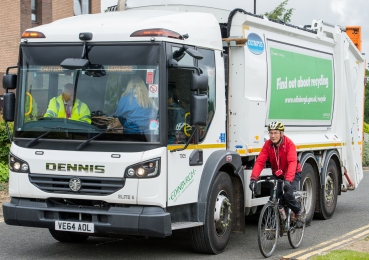 A new fleet of Refuse Collection Vehicles were unveiled this week by Transport and Environment Convenor Lesley Hinds aiming to reduce the risk of accidents involving cyclists.

After a trial on eight trucks, the City of Edinburgh Council has rolled out the ‘Cyclear’ technology to a further 17 new vehicles in the fleet. It now looks set to be installed in all future Large Goods Vehicles council vehicles.

The equipment comprises three elements, including an illuminated sign that lights up to alert anyone travelling towards a lorry when it is turning left and a speaker announcing the manoeuvre for additional warning.

Sensors on the side of the vehicle also detect when a cyclist travels alongside it, alerting the cyclist with an audible message, and sounding a warning buzzer to the driver.

The new vehicles have an Euro 6 engine emitting low emissions and fitted with air suspension meaning its better for roads in the longer term. Five cameras are installed on the new vehicles with screens in the cab giving drivers optimum views of their surroundings.

Transport Convener, Councillor Lesley Hinds, said: “Cycle safety is of utmost importance to the Council. To equip our vehicles with technology that minimises risk for all road users is a step we can’t afford not to take.

“The Council is determined to make Edinburgh’s roads as safe as possible for all road users, including cyclists. A significant rise in cycling has occurred in the city, while the rate of collisions involving cyclists continues to fall.

“Edinburgh is bucking the trend with more people cycling, walking or using public transport to get to work than anywhere else in Scotland and these newly equipped vehicles are an important step in increasing safety and raising awareness.”

Councillor for Portobello and Craigmillar Maureen Child, who also cycles occasionally in the city’s streets, said: “Busy city streets can be scary places for vulnerable road users like cyclists and pedestrians, especially those of us with less experience. Equally scary for a bin lorry driver with blind spots when manoeuvring in some tricky residential spaces. So this is great news..”

The Cyclear system, provided by Innovative Safety Systems (ISS), has been fitted to seventeen of the Council’s new refuse vehicles, with more on the way.

Last year, in collaboration with Cycling Scotland, the Council introduced Driver Awareness training for drivers of Heavy Goods Vehicles (HGVs), aiming to make them more aware of the dangers facing cyclists on the roads.